New York City native and retired architect Don M. Forst graduated from the New York City High School of Music and Art and the Cooper Union School of Architecture. He spent four years as a construction surveyor in the Air Force. He practiced architecture for 40 years, during which time he owned his own architectural firm on Long Island. He designed from two- to forty-story apartment buildings in New York City. He also designed numerous suburban office buildings and senior citizen housing. While living in New York, Don purchased a two-and-a-half-acre lot overlooking Long Island Sound in Lloyd Neck, Long Island. On that property, he designed and built his own contemporary residence. This became the home of Mark Reed in both of Don’s previous books, The Reincarnation of Vincent Van Gogh and The Return of Vincent Van Gogh.

Before retiring, Don returned to oil painting, his first love. Much of his work is large,  intense,  colorful,  three-by-four-foot oils. His style has been labeled by galleries as whimsical expressionism. His paintings have been displayed in galleries in Denver, Lakewood, Breckenridge, and Aspen, Colorado.

Don and his wife Barbara, also an artist, live in Lakewood, Colorado. The Replacement Conspiracy is his third novel.

Click on the cover image to read more about Don’s novel. 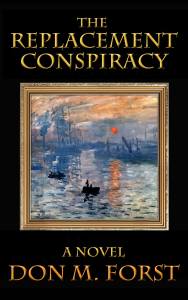